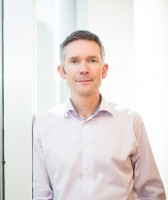 In this role, Ramshaw has responsibility for Production Operations, Drilling, Completions, Projects and Supply Chain functions.

Ramshaw began his career as a wireline engineer with Schlumberger in 1998, where he worked on and offshore in the U.K., the Netherlands, Denmark, Tunisia and Oman.

In 2001, he joined ConocoPhillips in Aberdeen where he held various production and operations roles. He transitioned to Houston in 2007 as a development engineer responsible for projects in Russia and Australia.

In 2009, Ramshaw was appointed director of Strategy and Portfolio Management, responsible for the integration of corporate long‐range plans and budgets, as well as the development of corporate strategy.

In 2011, he moved to Calgary as the Elmworth team lead, where he was responsible for unconventional development of one of the Deep Basin assets. In 2014, he was named Surmont 3 Project Integration Manager, accountable for front-end engineering of the next phase of the Surmont project, a 50/50 joint venture with Total E&P Canada, operated by ConocoPhillips.

In 2017, Ramshaw was appointed manager, Surmont Asset Integration, where he had overall accountability for Surmont’s asset strategy, technology and project development. He next served as facilities engineering manager before moving into his current role.

He earned a Master’s degree in Chemical Engineering from Cambridge University in 1998.